About the
Fantastic Magic

Thank you again for the stellar performance yesterday. The event was a knock-out success thanks to you.
You can be sure that you will be with us again.
............S.G - Verizon/Idearc

FROM BAYER CORP. (Elkhart, IN):
Thank you for performing your magic show during our recent

POC Marketing Managers Meeting in Dedham. Everyone enjoyed your show and your interaction

with the group was excellent. We heard a lot of positive comments.
-Rick Kates

ON THE INTERNATIONAL SCENE:::::: 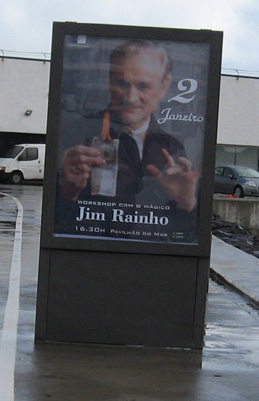 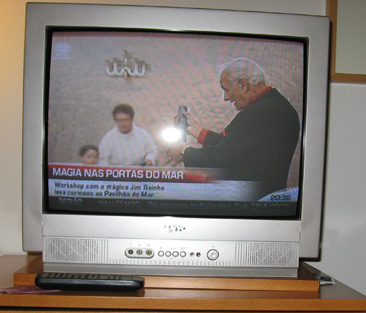 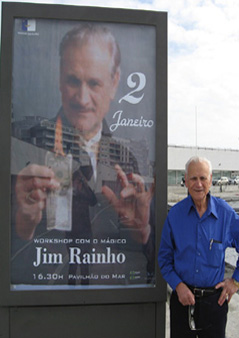 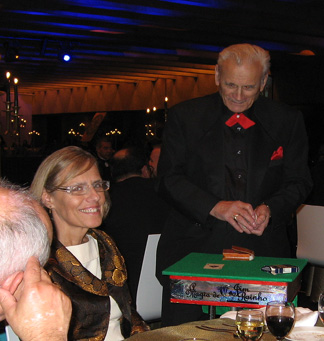 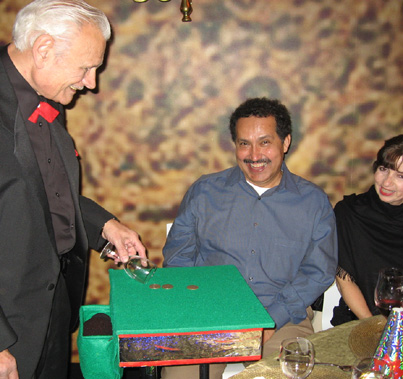 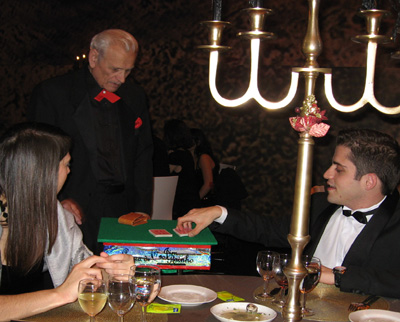 in Ponta Delgada in the Azores.  Along with the New Year's Eve roving magic performances, Jim did a kid's show on Saturday along

with a Magic Workshop.   There was great media coverage for the event with large posters announcing Jim's workshop.

via satellite to carriers of RTP and by Dish Network. He also did 2 newspaper interviews,

1 fifteen minute radio interview, and 2 on TV. Jim was originally hired, by an agent here in the States, for the new Year's Eve event,

but when they found out that he was Portuguese and spoke the language, they asked if would also do a Kid's show and a workshop.
Over 1,000 people attended the New Year's Eve celebration which was held at  the brand new "Doors of the Sea" Pavilion., a brand new Convention 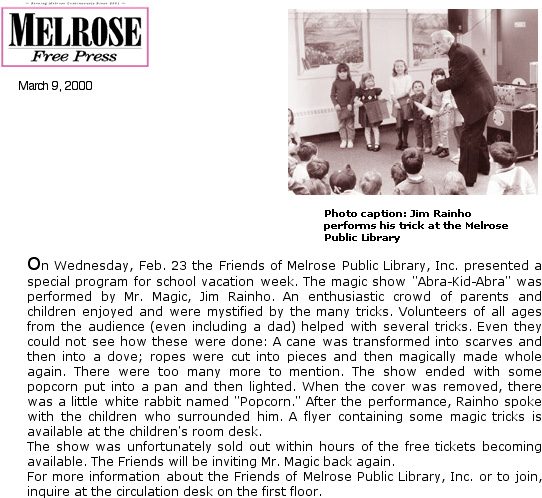 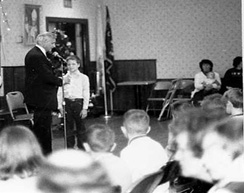 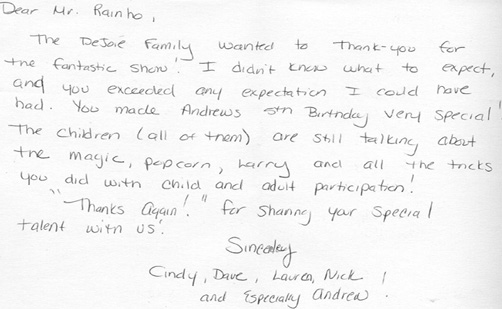 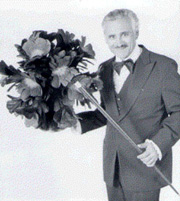 FROM DIGITAL EQUIPMENT CO. (Littleton, MA):
Just a note of thanks for your performance at

our Marketing Meeting. Everyone is still talking about your show. During your performance, as I

looked around the room, I could see you had the crowd mesmerized with your 'hot' and 'lively'

feats of prestidigitation. You really topped off an overwhelmingly successful day. I would not hesitate

to recommend you to any of my friends and associates.
-Eleanor Broadbent (Now with Bay Networks for whom we have also performed.)

FROM UNICCO SERVICE CO. (Boston, MA:
I want to thank you for appearing at UNICCO's

recent Christmas party. Jim, I know that you had to do some last minute juggling of you busy schedule

to accommodate our 11th. hour request. Your show was fantastic and I want you to know that I and

other members of the UNICCO Organization are most appreciative of your efforts.
-John C. Feitor


FROM THE CAMBRIDGE PUBLIC LIBRARY (Cambridge, MA):
Thank you so much for the

performances which you gave this summer. Your presentations kept the children and adults entranced!

dropped open. You have such a good rapport with the children . You know what makes them laugh,

and what engages them and what they really like. Thank you for giving all the children a chance to pet

FROM EG&G OPTOELECTRONICS (Salem, MA):
Just a quick note to tell you how enjoyable your

performance was at our employee appreciation dinner. I have given your name and number to a number

of people interested in hiring you. Even the caterer requested information.
-Ann Richards

FROM CUB SCOUT PACK 113: Cub Scout Pack 114 of Medfield, MA:
We have been so pleased with

your performances of the past two years that we wish to book you again for our next event.
-Anita Calotta

FROM SONS OF ITALY IN WALTHAM (Waltham, MA):
Thank you for performing for us. You were

FROM DUTILE EL. SCHOOL IN BILLERICA (Billerica, MA):
The children are still talking about the

animals and all the great tricks.
-Mary Giurle

FROM MEDFORD FIREFIGHTERS (Medford, MA):
Thank you for a great performance. We will be in

touch with you as we begin to plan next year's function.
(That was seven years ago and Jim is still doing their Xmas show.)
-Tim Beckwith

FROM ST. JAMES CHURCH (Arlington, MA):
Everyone truly enjoyed your show at our church event.

I am still receiving rave reviews on what a super performance you gave.
-George Arena

CLICK HERE TO RETURN TO TOP OF THIS PAGE